Covid-19 Update: Our Flinders St store is still here to serve you Delicious Australian Made Churros 24/7 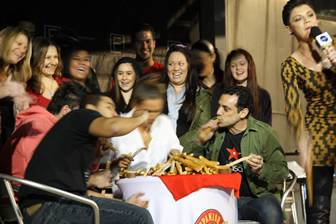 Saturday 20th August was the date that marked the first EVER Churro Eating Competition!!

From the very first day that we announced the competition, hundreds of registrations came flying in. Melbourne’s population was keen as ever to come along to the event as we received messages on Facebook and from our customers in store.

As the count down started and the news began to spread, Channel 10’s 7pm Project showed the lead up to the event on Friday 19th, August. Contestants were getting into the spirit already by practicing their churro eating, to ready themselves for the big day. (You can watch the video here 7pm Project ) People were drawn to the Federation Square’s main stage as it came alive with the smell of fresh churros from the Spanish Doughnuts stalls, the sounds of energetic Latin music and a dance spectacular courtesy of the Melbourne Salsa dance school. Many people came down to support the event and to enjoy the Spanish Doughnuts experience.
Stalls were set up around the Square where people could try some of Spanish Doughnuts Original Churros as well as some of our famous flavoured churros.

Held on the main stage at Federation Square, 10 contestants ate their way through as many churros as they could in 2 minutes. Dressed in their Spanish Doughnuts caps and t-shirts they faced their challenge separating them from $1000 and being declared the first Churro Eating World Champion. After 2 minutes of churro chocolate dipping as many yummy Original Spanish Doughnuts as they could the winner was announced.

Not only was the Churro Eating Competition the first of its kind, but the first Churro Salsa Competition proved to be a hit! Couples registered on the day and were given two churros to hold while they salsa’d around the stage. The last couple to be holding their churros intact were the winners. A definite crowd pleaser and a lot of fun for all of our contestants.

CONGRATULATIONS TO THE WINNERS We at Spanish Doughnuts hope that our participants and audience enjoyed the day as much as we did. Thankyou for coming down and supporting us on the day, you made it very special and a lot of fun. We hope to see you in-store soon!!